You are here: Home › DPK interim leader's push for 586 Generation politicians to step aside meets resistance

Park Ji-hyun, the co-interim leader of the liberal Democratic Party of Korea (DPK), is seeking to bring change in the giant main opposition party by proposing that senior lawmakers ― members of the "586 Generation" ― step aside to make room for the young generation, but her attempt has sparked discord as she has faced resistance from within. Korea's 586 Generation refers to those who are currently in their 50s, entered university in the 1980s and were born in the 1960s. During a meeting with the party leadership, Wednesday, Park said that the mission of the politicians of the 586 Generation had been to restore democracy and make it take root in Korea, but now that this role has been almost fulfilled, they should prepare for a "beautiful exit" from politics to help the party regain public trust ahead of the June 1 local elections. A day before the remarks, she had held a press conference and apologized to the public on behalf of the DPK and announced a reform plan, but it had been held without the full agreement of the other members of the party leadership.

Park, 26, rose to the party's leadership after it lost the March 9 presidential election, in a bid to give a breath of fresh air to the party ahead of the June 1 local elections. However, recent surveys show that odds are leaning towards the ruling People Power Party, while Park's call for the 586 Generation to step back and leave space for those in their 20s and 30s is facing resistance from some party members. After the meeting, Yun told reporters that "the 586 Generation's exit is not a matter that can be decided by some people before the local election. Park's efforts to ask the 586 Generation to step aside are interpreted by some as factional infighting within the DPK, and by others as sincere efforts to reform and renew the party, since the party's primaries for the March 9 presidential candidate.

During the primaries, the liberal party divided into two factions between those supporting former President Moon Jae-in and those supporting Lee-Jae-myung, who was selected as the presidential candidate at the time, but who lost by a razor-thin margin. While the DPK is still dominated by the pro-Moon group, many of whom are 586 Generation politicians, Park started her political career by joining Lee's campaign, thus receiving support from the pro-Lee group. "The DPK handed over the government created by the people holding candles to the prosecutor-led administration in just five years, so it is natural for the party to reflect and apologize in front of the public," Rep. According to a Gallup Korea poll released on May 20, the DPK's support rate was at 29 percent, which was the lowest since November of last year.

2022.05.26 CartoonPark Ji-hyun, interim co-head of the liberal Democratic Party (DP), called on older politicians to step down and pave the way for younger politicians Wednesday after issuing a public apology for the DP’s misdeeds on Tuesday. [PARK YONG-SEOK]

Earlier this month, the party expelled Rep. Park Wan-joo, a third-term lawmaker, who was accused of sexually harassing a female assistant last year. "Park said that youths in their 20s and 30s are the "greatest victims" of the mistakes made by Generation 586 politicians. Early voting begins Friday.On Wednesday, PPP Chairman Lee Jun-seok campaigned in South Chungcheong, while floor leader Kwon Seong-dong headed to North Gyeongsang. The PPP leadership will

Although the compromise version of the DPK's prosecutorial reform bill was passed at the general meeting of PPP lawmakers, it would be impossible for the PPP to push ahead with it when there are critical contradictions," Lee said. DPK floor leader Rep. Park Hong-keun said in a phone interview with local broadcaster MBC that the PPP breaking the agreement after just two days is intolerable. On Friday, the floor leaders

Park Ji-hyun, co-interim chief of the main opposition Democratic Party, speaks at a press conference at the National Assembly in Seoul on Tuesday. (Yonhap)With the local elections less than a week away, the main opposition Democratic Party (DP) has found itself battering with an internal feud amid concerns the infighting may hinder its chances in the elections. "Our party must say goodbye to the politics of fandom, while recovering the 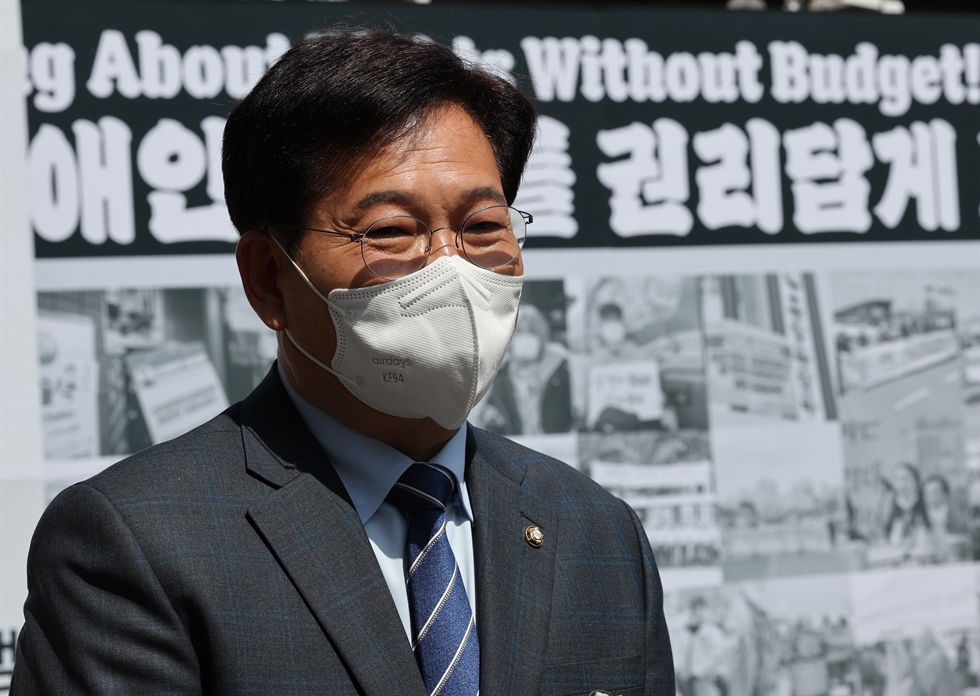 The poll, released Tuesday by the Chicago Council on Global Affairs, found that 71% of the South Koreans surveyed favor Seoul developing its own nuclear weapons, while 56% support a deployment of U.S. nuclear weapons in the country. Delving deeper, the researchers said that South Korean attitudes toward the weapons do not strongly align with the reasons for going nuclear usually offered by politicians and pundits. However, when asked to

In a nutshell, the country has suffered setbacks in the rule of law and democracy under Moon's rule. His government and party had weakened the prosecution in the name of prosecutorial reform in order to prevent it from investigating corrupt politicians and bureaucrats. The DPK railroaded two controversial bills to deprive the prosecution of its investigative powers, and President Moon signed them into law with only six days before his

Chang-Tai HsiehIn the same week that Taiwanese took to the streets to repudiate Russia’s invasion of Ukraine, Taiwan’s leaders rolled out the red carpet for a visit by former US President Donald Trump’s secretary of state, Mike Pompeo. Even more remarkably, this transformation occurred in the absence of formal diplomatic ties or participation in international organizations such as the United Nations.But Taiwan has continued to push for formal diplomatic recognition

Who are the captains in Tokyo Revengers?

What happens when a prime minister resigns in Canada?

Can an interim leader become leader?

What happens if the prime minister of Canada resigns?

What happens when a Canadian prime minister resigns?