China will seek a region-wide deal with almost a dozen Pacific island countries covering policing, security and data communication cooperation when Foreign Minister Wang Yi hosts a meeting in Fiji next week, documents seen by Reuters show. A draft communique and five-year action plan sent by China to 10 Pacific islands ahead of a meeting of foreign ministers on May 30 has prompted opposition from at least one of the invited nations, which says it showed China's intent to control the region and "threatens regional stability. In a letter to 21 Pacific leaders seen by Reuters, the president of the Federated States of Micronesia (FSM), David Panuelo, said his country would argue the "pre-determined joint communique" should be rejected, because he feared it could spark a new "Cold War" between China and the West. Wang will visit eight Pacific island nations that China has diplomatic ties with between May 26 and June 4. He arrives on Thursday in the Solomon Islands, which recently signed a security pact with China despite objections from Australia, the United States, Japan and New Zealand, which fear it could upset regional security and give China a military foothold in the Pacific. China rejects this, saying the pact is focused on domestic policing and criticism by Western countries was interference in the Solomon Island's sovereign decision-making. Asked to respond to the letter, reported here for the first time, China's foreign ministry spokesman Wang Wenbin told a regular media briefing in Beijing that he was unaware of it, adding that China and South Pacific countries "are good friends and partners in mutual respect, equality and mutual benefit and common development. "I do not agree at all with the argument that cooperation between China and the South Pacific island countries will trigger a new Cold War," he said. Wang's visit would "consolidate mutual political trust, expand practical cooperation, deepen people-to-people ties and jointly build a closer community of destiny among China's Pacific island countries.

The FSM government, which has a defence agreement with the United States as well as an economic cooperation agreement with China, declined to comment to Reuters on the letter. A region-wide agreement covering security and trade between China and Pacific islands would represent a shift in Beijing's focus from bilateral relations to dealing with the Pacific on a multilateral basis, and would likely increase the concern of Washington and its allies. China circulated the China-Pacific Island Countries Common Development Vision draft document, as well as a five-year action plan, ahead of the meeting in Fiji. It states China and the Pacific islands will "strengthen exchanges and cooperation in the fields of traditional and nontraditional security. "China will hold intermediate and high-level police training for Pacific Island Countries through bilateral and multilateral means," the document says. The action plan outlines a ministerial dialogue on law enforcement capacity and police cooperation in 2022, and China providing forensic laboratories. The draft communique also pledges cooperation on data networks, cyber security, smart customs systems, and for Pacific islands to "take a balanced approach" on technological progress, economic development and national security. Chinese telecommunications firm Huawei, which is barred from 5G networks run by several U. The communique also proposes a China-Pacific Islands Free Trade Area, and support for action on climate change and health.

In his letter to other leaders, Panuelo said the communique would draw Pacific islands that have diplomatic relations with China "very close into Beijing's orbit, intrinsically tying the whole of our economies and societies to them". Panuelo highlighted the risk of being caught in conflict as tensions rise between the United States and China over Taiwan. "The practical impacts, however, of Chinese control over our communications infrastructure, our ocean territory and the resources within them, and our security space, aside from impacts on our sovereignty, is that it increases the chances of China getting into conflict with Australia, Japan, the United States and New Zealand," he said. China's provision of customs systems would lead to "biodata collection and mass surveillance of those residing in, entering and leaving our islands," he added. He was also critical of Australia's lack of action on climate change. New Australian Prime Minister Anthony Albanese pledged this week to increase climate financing to Pacific islands, saying climate change was their main economic and security challenge. "China has made its intentions clear," Australia's foreign minister, Penny Wong, said when asked about the Reuters report. "So too are the intentions of the new Australian government. Wong, who travels to Fiji on Thursday, has pledged to increase opportunities for Pacific island citizens to work and migrate to Australia.

Prime Minister Scott Morrison has rebuffed suggestions he's bungled policy on the Pacific after Solomon Islands signed a security agreement with China. Beijing's Foreign Ministry has announced the agreement has been formalised, after a draft was leaked last month.

The evolution of man-made islands HAN YOUNG-IKThe author is the political news editor of the JoongAng Ilbo. In places with limited available land, such as Hong Kong and Macau, construction of artificial islands have been active. Since 2014, China has been building artificial islands around the South China Sea. John Aquilino, the commander of the United States Indo-Pacific Command, publicly shared that the militarization of three artificial islands off the

The agenda topics for the trilateral meeting were the security environment on the Korean Peninsula and in the region, “regional security challenges, and the ironclad commitment of the US to defend” both Japan and South Korea. “The military leaders shared a common understanding on the significance of enhancing regional security through close trilateral cooperation and coordination,” a trilateral joint statement read. The three also had an extensive discussion on “multilateral

KYODO NEWS - 10 minutes ago - 08:36 | All, WorldU.S. President Joe Biden will visit South Korea and Japan from May 20 to 24, the White House announced Wednesday, making it his first trip to Asia since taking office in January last year. His trip will advance the administration's "rock-solid commitment to a free and open Indo-Pacific and to U.S. treaty alliances with the Republic of Korea and Japan," 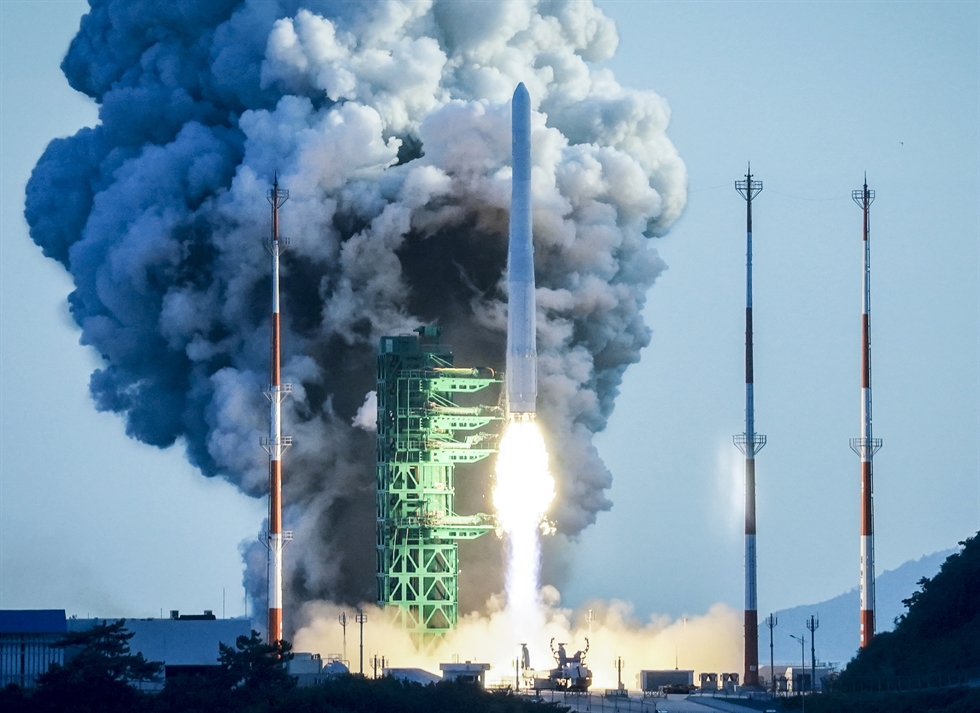 Korea and the United States have signed their first bilateral document on joint space policy research, Seoul's defense ministry said Tuesday, in the allies' latest push to reinforce cooperation in the increasingly crucial security domain. The SCWG is the two countries' working-level consultative body on space security cooperation. The document puts forward directions of the allies' space security policies and includes a series of projects aimed at strengthening their capabilities

Solomon Islands Prime Minister Manasseh Sogavare walks with Chinese Premier Li Keqiang during a welcome ceremony at the Great Hall of the People in Beijing, Oct. 9, 2019. The U.S. has said it will open an embassy in the Solomon Islands, laying out in unusually blunt terms a plan to increase its influence in the South Pacific nation before China becomes ''strongly embedded.'' AP-YonhapThe U.S. has said it will open

The US seeks to ensure peace and security in the Indo-Pacific region partly by reinvigorating its trilateral cooperation with South Korea and Japan, US Deputy Secretary of State Wendy Sherman said. "Threats to our security are evolving, and our security approach must evolve with them. The remarks come after North Korea fired its first intercontinental ballistic missile in over four years on March 24. The deputy secretary expressed hopes that

Washington: The US seeks to ensure peace and security in the Indo-Pacific region partly by reinvigorating its trilateral cooperation with South Korea and Japan, US Deputy Secretary of State Wendy Sherman said. “Threats to our security are evolving, and our security approach must evolve with them. The remarks come after North Korea fired its first intercontinental ballistic missile in over four years on March 24. The deputy secretary expressed hopes

What is the purpose of Pacific Islands Forum PIF?

Is Solomon Islands part of Australia?

What is the main issues in South China Sea?

The South China Sea involves a wide array of complex issues covering sovereignty over islands and reefs, maritime delimitation, maritime security, cooperation against piracy and terrorism, resource development and environmental protection, all of which require extensive research. More info : What is the main issues in South China Sea?

What are the major challenges that the South China Sea is currently facing?

The South China Sea involves a wide array of complex issues covering sovereignty over islands and reefs, maritime delimitation, maritime security, cooperation against piracy and terrorism, resource development and environmental protection, all of which require extensive research. More info : What are the major challenges that the South China Sea is currently facing?

What is the purpose of the Pacific islands Forum?

The Pacific Islands Forum Secretariat is an international organisation that aims to stimulate economic growth and enhance political governance and security for the region, through the provision of policy advice; and to strengthen regional cooperation and integration through coordinating, monitoring and evaluating ... More info : What is the purpose of the Pacific islands Forum?