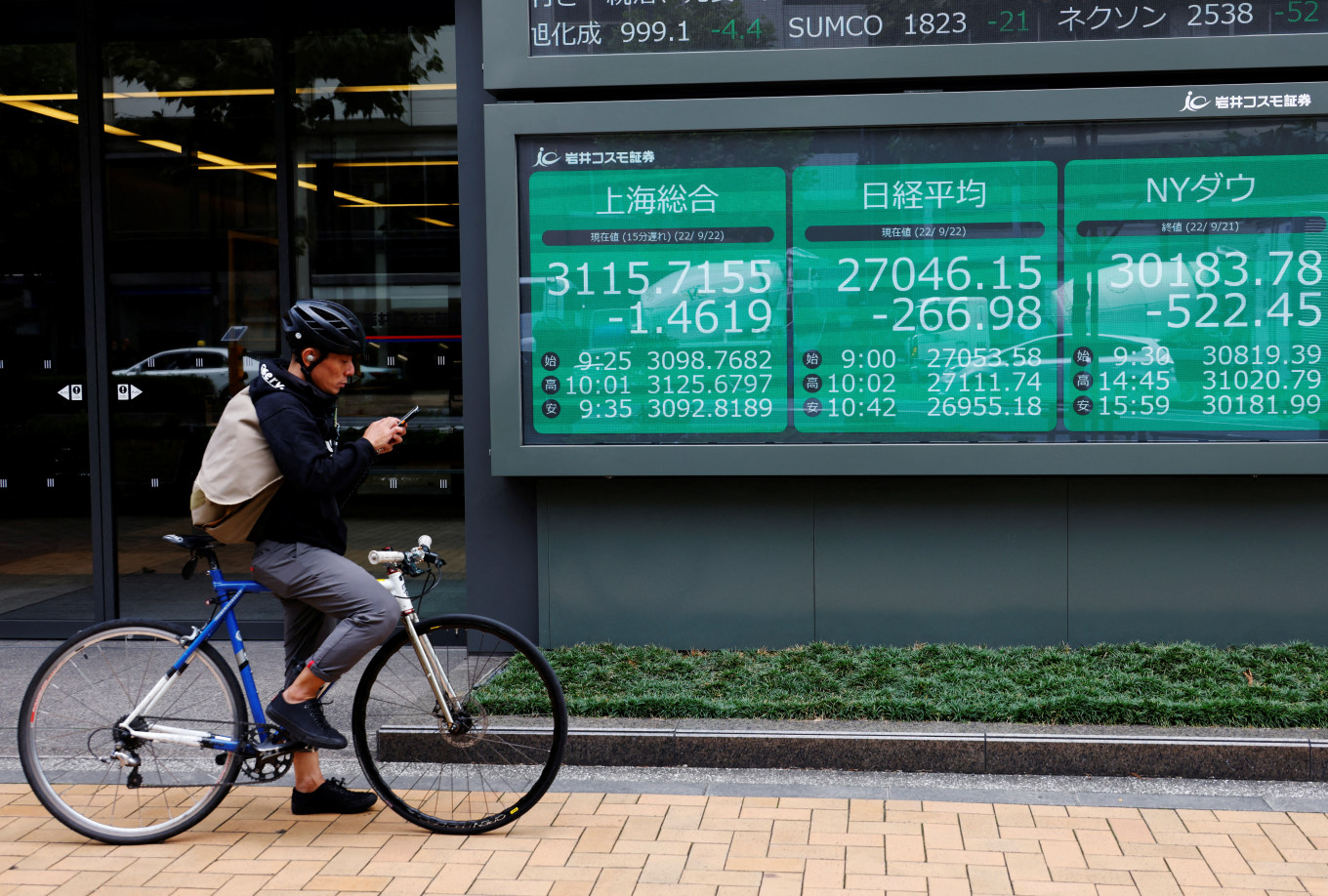 Waller added the markets were well ahead of themselves on just one inflation print, though he did concede the Fed could now start thinking about hiking at a slower pace. MSCI's broadest index of Asia-Pacific shares outside Japan added 0.2 percent, after jumping 7.7 percent last week. The news on COVID rules had stoked a short-covering bounce in the yuan last week, which added to broad pressure on the dollar as yields dived. The dollar's recent retreat provided a much-needed fillip to commodities, with gold up at $1,768 an ounce after jumping over $100 last week. Oil futures extended their gains with Brent LCOc1 up 86 cents at $96.85, while US crude rose 80 cents to $89.76 per barrel.
Continue reading...

Unclear if Biden will meet Xi in Bali: White House

Attention is growing on whether Biden will meet with Chinese President Xi Jinping on the fringes of the G-20 summit in Bali, to be held for two days from Nov. 15. The talks, if realized, will be their first in-person meeting since Biden took office in January last year. The possibility of the first in-person Biden-Xi meeting emerged at one point last year envisioned for the sidelines of the G-20 summit in Italy. Even with tensions between the two countries increasing following US House of Representatives Speaker Nancy Pelosi's visit in August to Taiwan, a self-ruled democratic island that Beijing views as its own, White House officials have talked about efforts to realize a leaders' meeting. In September, Biden expressed eagerness to meet Xi on the sidelines of the G-20 event, saying "If he's there, I'm sure I'll see him."

Share this article WhatsappFacebookTwitterLinkedin Reuters Seoul, South Korea ● Mon, October 31, 2022 16:45 0 8bbe8b56fac1a92f2de4c67cfb59fada 2 Economy South-Korea,stampede,economy,K-pop,festival FreeAcross South Korea, events such as autumn foliage festivals and K-Pop concerts are canceled, and grief-stricken communities are putting off gatherings after a Seoul crowd crush killed at least 154 people, threatening to crimp growth further. Universities have canceled weekend retreats known as MTs, and the opening event of the two-week Korea Sale Festa, the Korean version of the Black Friday, was called off. South Korea's southern resort island of Jeju called off the Jeju Olle Walking Festival, scheduled from Nov 3 to 5. The Korea Baseball Organization and Korea Volleyball Federation both said there won't be cheerleaders during its championship series. South Korea's economic growth already decelerated last quarter in response to slowing exports and a weakening currency.

Which leaders will attend G20 summit?

It will also mark the first face-to-face meeting between US President Joe Biden and Chinese President Xi Jinping since Biden became president. UKRAINE'S PRESIDENT VOLODYMYR ZELENSKIY (VIRTUAL)Indonesia invited Zelenskiy to attend the summit as an obsever, although the Indonesian foreign ministry has said he will appear at the summit virtually. INDIAN PRIME MINISTER NARENDRA MODIModi is due to symbolically take over the G20 presidency from current chair Indonesian President Joko Widodo in Bali. AUSTRALIAN PRIME MINISTER ANTHONY ALBANESEAlbanese has highlighted the importance of this summit amid global economic uncertainty. He also committed to work closely with the Indonesian president to help deliver a successful summit.

“Deeply saddened to learn about the tragic stampede in Seoul,” President Jokowi wrote on Twitter on Sunday. Chinese President Xi Jinping has also offered his condolences to South Korea. AFP reported that according to Chinese state broadcaster CCTV, Xi said on Sunday that he was "shocked" to learn of the stampede. "On behalf of the Chinese government and the people of China, I express our deep condolences for the victims," Xi said. Police had also not expected such a large crowd at the Halloween event, he said.

As South Korea mourns the deaths of more than 150 people in a Halloween party crush, many people—even those not directly involved—are dealing with trauma and a search for answers that has at times blamed the victims, a psychiatry expert says. Tens of thousands of revelers, many of them young, had crowded into the narrow streets and alleyways of Itaewon for the first unrestricted Halloween festivities in three years. The government sent a mobile clinic run by the National Center for Disaster Trauma to Itaewon, offering free counseling. "When you see reactions to disasters, there are inevitable reactions trying to find some scapegoats and blaming them," Jun said. "For example, when we had COVID-19 cases the first time in South Korea, there were a lot of blaming reactions like 'Why did you go there?

On China, Biden told the summit that "the United States will compete vigorously.... while keeping lines of communication open and ensuring competition does not veer into conflict," the White House said in a statement. "The United States and its NATO allies are trying to master this space," Lavrov told a news conference in Phnom Penh, quoted by AFP. Washington is attempting to boost its influence in Southeast Asia, worried by Beijing's increasingly assertive behaviour in the region, which it views as its strategic backyard. Lavrov accused the United States of pushing the "militarisation of this region, clearly aimed at containing China and limiting Russian interests in the region". Like ally the United States, Australia's ties with China have also deteriorated in recent years.

Russia, whose forces invaded Ukraine on Feb. 24, announced the reversal on Wednesday after Turkey and the United Nations helped keep Ukrainian grain flowing for several days without a Russian role in inspections. The defence ministry justified the resumption by saying it had received guarantees from Ukraine that it would not use the Black Sea grain corridor for military operations against Russia. The grain deal, originally reached three months ago, had helped alleviate a global food crisis by lifting a de facto Russian blockade on Ukraine, one of the world's biggest grain suppliers. Putin had earlier proposed sending grain to countries such as Djibouti, Somalia and Sudan first, where it is badly needed. Russian authorities have repeatedly said that Ukraine could be preparing to attack the massive Kakhovka dam and flood the region.

Biden, who landed in Bali island after meeting Southeast Asian and East Asian leaders in Cambodia, said the United States would "compete vigorously" with Beijing while "ensuring competition does not veer into conflict". Russia's Foreign Minister Sergei Lavrov also arrived in Bali from Cambodia earlier on Sunday. "The United States and its NATO allies are trying to master this space," Lavrov told reporters. Like ally the United States, Australia's ties with China have also deteriorated in recent years. "Leaders talked in a mature way, no one left," he told a news conference at the end of the three-day summit led by the Association of Southeast Asian nations (ASEAN).