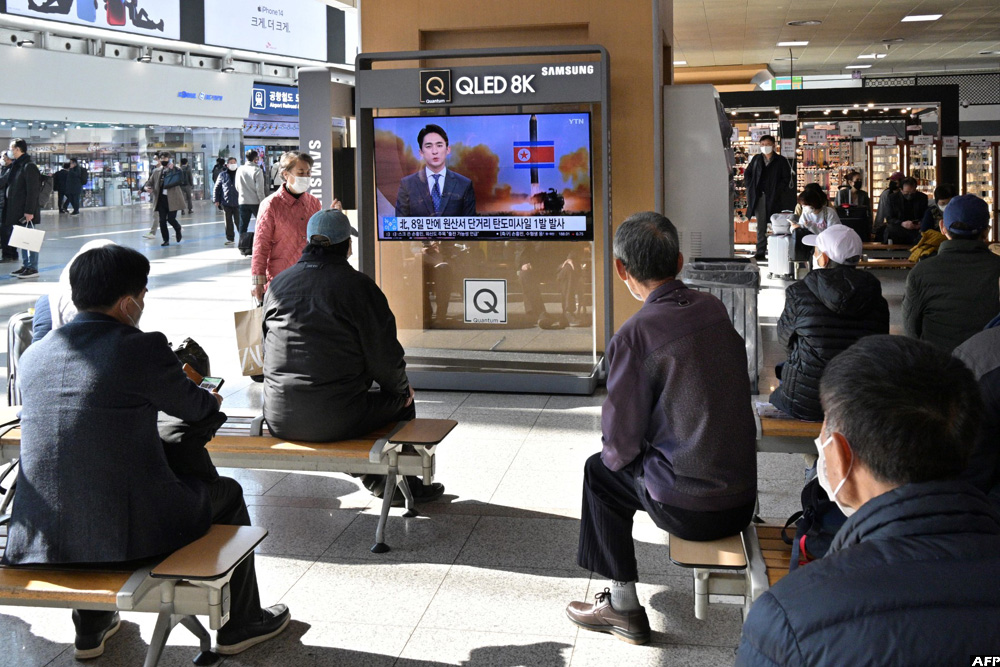 The leaders of China and Japan will hold their first face-to-face talks in three years on Thursday, after North Korea fired the latest in a record-breaking missile blitz that has sent nuclear fears soaring. Chinese President Xi Jinping flies into the talks in Bangkok from a G20 meeting in Bali where US President Joe Biden pressed him to use his influence to rein in Pyongyang's activities. As Xi and Japanese Prime Minister Fumio Kishida prepared to meet, North Korea fired a short-range ballistic missile and warned Washington and its allies to expect a "fiercer" military response. Seoul and Washington have warned the North could be preparing to carry out a nuclear test -- which would be its seventh. The G20 was upended by fears that a deadly missile strike on Poland signalled a dangerous escalation of Russia's war in Ukraine.
Continue reading...

How not to retire: South Korean ex-president bedevilled by protests

After five years running South Korea, former president Moon Jae-in moved to a peaceful village far away from Seoul, in search of a quiet retirement. The protests targeting Moon highlight how social media is transforming political action in South Korea, by both amplifying demonstrators' voices and allowing them to generate funds to sustain their activities. As president, Moon championed engagement with Pyongyang, meeting North Korea's leader Kim Jong Un and then-US president Donald Trump for talks. There have been short-term protests outside some South Korean politicians' residences in the past. What sets the Moon protests apart is their "sustainability thanks to the profitable business model from YouTube," said Cho Ki-suk, a political science professor at Ewha University.

— AFP photoNorth Korea fired one intercontinental ballistic missile and two short-range missiles on Thursday, although the longer-range launch appeared to have failed, Seoul’s military said. Seoul’s military said earlier it had detected the launch of the long-range ballistic missile at around 7:40am in the Sunan area of Pyongyang. The multiple missile launches come as Seoul and Washington are staging their largest-ever joint air drills, involving hundreds of warplanes from both sides. On October 4, North Korea fired a missile over Japan that also prompted evacuation warnings. Pyongyang later claimed it was a ‘new-type ground-to-ground intermediate-range ballistic missile’.

Dignitaries pose for a photo at the inaugural ceremony of Korean Film Festival 2022 held at Bangladesh National Museum in the capital on Wednesday. — Sourav LaskerKorean Film Festival 2022 began at the Bangamata Sheikh Fazilatunnesa Mujib Auditorium of Bangladesh National Museum in the capital on Wednesday. Among them, there was a popular actor.’‘The inaugural ceremony of the Korean Film Festival was scheduled to feature a cultural performance. Lee Jang-keun said that this year’s Korean Film Festival in Dhaka has been organised on a small scale as the South Korean government is observing a weeklong national mourning period. Escape from Mogadishu was selected as the South Korean entry for the Best International Feature Film at the 94th Academy Awards.

— AFP photoThe North Korean military said its response to US-South Korean war drills would be ‘resolute and overwhelming’, state media reported on Monday. The United States and South Korea have warned that such missile launches could culminate in a nuclear test by North Korea. North Korea will respond to all ‘anti-DPRK war drills’ with ‘sustained, resolute and overwhelming’ measures, it said. The North Korean air force also conducted a ‘large-scale all-out combat sortie operation’, involving 500 planes, according to KCNA. US-South Korea joint drills have long sparked strong reactions from North Korea, which sees them as rehearsals for an invasion.

North Korea dismisses as US claims of arms supplies to Russia

North Korea said on Tuesday that claims by the United States that Pyongyang is supplying artillery ammunition to Moscow for its war in Ukraine were groundless, state media KCNA reported. The United States and South Korea have warned that the North’s repeated recent missile launches could culminate in a nuclear test. Tuesday’s statement refuted allegations last week by White House national security spokesman John Kirby, who said the artillery from North Korea to Russia was coming under cover of shipments to the Middle East or Africa. Kirby would not say how or by what routes the North Korean ammunition is traveling. North Korea’s military confirmed that its latest ballistic missile tests were a reply to Washington and Seoul’s so-called Vigilant Storm operation.

All my heart is with you!’ Senegalese president Macky Sall tweeted with the African champions' first game of the World Cup just 10 days away. ‘Right now the game against Brentford, the players' one eye is on the World Cup,’ said Manchester City manager Pep Guardiola. It's not going to change anything in terms of winning or not winning the Premier League, and I'm going to miss the World Cup. The accumulated fatigue also raises questions over the quality of matches fans can expect to see at the World Cup. ‘He was really, really tired,’ said Spurs boss Antonio Conte.

Cristiano RonaldoCristiano Ronaldo will lead Portugal into the World Cup after Fernando Santos named the veteran forward in his 26-man squad on Thursday. ‘All the players I have called up come with the hunger to win and make Portugal world champions, Ronaldo included,’ said Santos. Ronaldo will go to his fifth World Cup, having played for his country in every edition of the tournament from 2006 onwards. ‘What is most important are the players who will go to the World Cup,’ said Santos, refusing to discuss players who didn't make the cut. Portugal open their World Cup campaign in Group H against Ghana on November 24, before facing Uruguay on November 28 and South Korea on December 2.