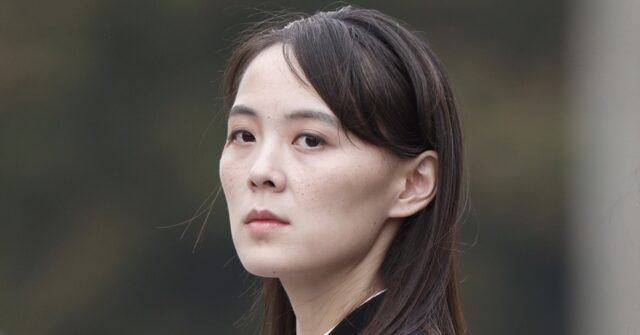 It could be seen as a possible attempt to help foster anti-Yoon sentiments in South Korea. Kim Yo Jong’s official title is a vice department director of the Central Committee of the North’s ruling Workers’ Party. But South Korea’s spy service believes she’s the North’s second-most powerful person after her brother and handles relations with South Korea and the United States. North Korea has been under 11 rounds of U.N. sanctions imposed over its nuclear and missile tests since 2006. North Korea has repeatedly said the U.N. sanctions are proof of U.S. hostility toward North Korea along with its regular military drills with South Korea.
Continue reading...

The South Korean Rugby Union on Monday apologized for playing the protest song “Glory to Hong Kong” instead of the Chinese Communist anthem at the men’s finals match in Incheon on Sunday. “Asia Rugby and Korea Rugby Union would like to sincerely apologize to the Hong Kong Rugby Union, the Government of Hong Kong Special Administrative Region and the Government of the People’s Republic of China for this incident,” the organizers said in their formal statement of apology. Protest Song Played for Hong Kong Rugby Team in South Korea https://t.co/a3iI5X5keY — Voice of America (@VOANews) November 14, 2022A source within the Korea Rugby Union told the South China Morning Post (SCMP) on Monday that a staffer “inadvertently” selected “Glory to Hong Kong” because they believed it was the correct national anthem. Those apologies were not enough to placate the Hong Kong government, which officially accepted the “human error” explanation but still demanded a “full and in-depth investigation” by the Hong Kong Rugby Union. “Glory to Hong Kong” was composed by an anonymous Hong Kong musician and embraced by the 2019 protest movement as its unofficial anthem.

North Korea Says It Will Become a 'More Serious Threat' to U.S.

The foreign minister of North Korea, Choe Son Hui, published an angry screed against America vowing Pyongyang would become a “more serious, realistic, and inevitable threat” to America so long as Washington pursued cooperation with South Korea and Japan. Experts within all three governments have been predicting an upcoming nuclear weapons test since at least May, though North Korea has yet to execute one. North Korea has conducted six nuclear weapons tests, the latest in 2017. The three held a joint press conference in Cambodia on Sunday prior to meeting behind closed doors, telling reporters that they would prioritize the threat North Korea poses to the region in their discussions. Yoon, speaking last, condemned Pyongyang’s “more hostile and aggressive provocations.”“Since I took office in May, North Korea has launched some 50 missiles to date,” he observed.

Analysts said China’s ongoing coronavirus lockdowns, combined with a worldwide economic slowdown and disruptions from the Russian invasion of Ukraine, contributed to the dismal numbers. Chinese exporters weren’t even able to capitalize on a prolonged weakening in the yuan currency since April and the key year-end shopping season, underlining the broadening strains for consumers and businesses worldwide. CNBC noted China’s exports to the United States fell by 12.6 percent year-on-year in October, while the European Union was down nine percent, while China’s shipments to the Association of Southeast Asian Nations (ASEAN) actually increased 20 percent in October. Factory workers have been climbing over fences and fleeing home to remote villages on foot to escape a coronavirus lockdown imposed on the facility. A common fear was that healthy people would be locked up in dormitories with the infected, rapidly spreading coronavirus infections.

Nov. 14 (UPI) — U.S. President Joe Biden said he does not think a possible cold war with China is around the corner or necessary, after meeting with Chinese President Xi Jinping on Monday. Biden and Xi spoke about China’s intentions towards the democratic island of Taiwan North Korean nuclear missile tests as well as Russia’s aggression against Ukraine during their meeting. “I do not think there is any imminent attempt on the part of China to invade Taiwan,” Biden told reporters. Both leaders did agree when it came to North Korea and that country’s continued long-range missile tests. “I’m confident China’s not looking for North Korea to engage in further escalatory means.”

North Korea fired one intercontinental ballistic missile and two short-range missiles Thursday, although the longer-range launch appeared to have failed, Seoul’s military said. “North Korea’s ICBM launch is presumed to have ended in failure,” the South Korean military said. Seoul’s military said earlier it had detected the launch of the long-range ballistic missile at around 7:40 am (2240 GMT) in the Sunan area of Pyongyang. The multiple missile launches come as Seoul and Washington are staging their largest-ever joint air drills, involving hundreds of warplanes from both sides. On October 4, North Korea fired a missile over Japan that also prompted evacuation warnings.

North Korea threatens to use nuke over S. Korea-US drills