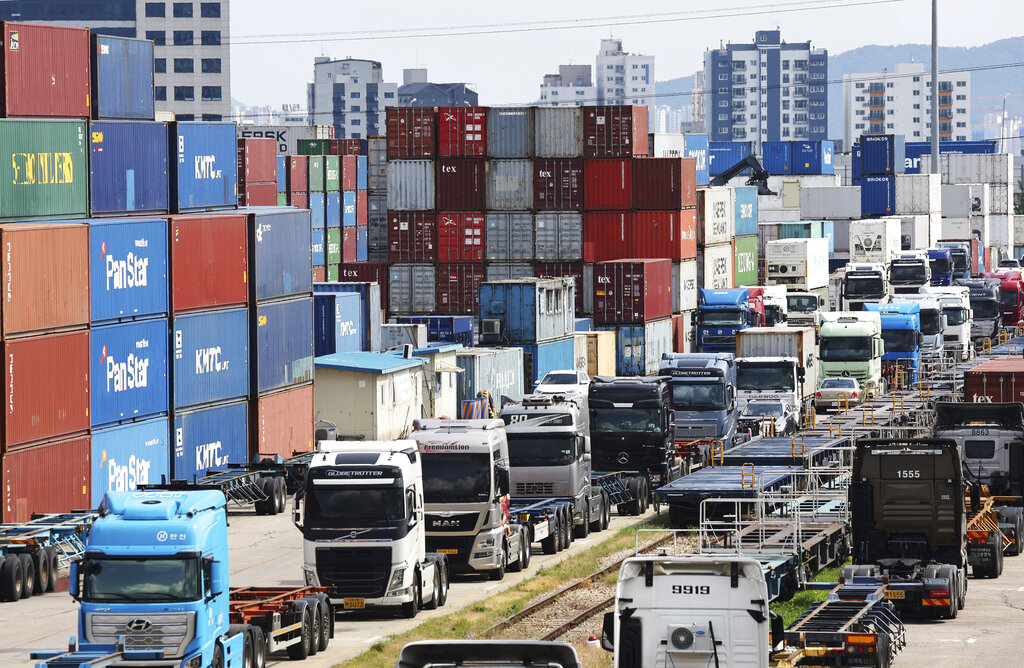 UIWANG: Unionised truckers in South Korea kicked off their second major strike in less than six months today, threatening to disrupt manufacturing and fuel supplies for industries from autos to petrochemicals in the world’s 10th largest economy. In June, an eight-day strike by truckers delayed cargo shipments across Asia’s fourth largest economy, costing more than US$1.2 billion in lost output and unmet deliveries. Lead organiser the Cargo Truckers Solidarity Union (CTSU) has warned the strike could stop oil supplies at major refineries and transport at major ports and industrial plants. The truckers chanted, “We stop, the world will stop!” and “Let’s stop driving to change the world!”. The Korea Oil Station Association is asking gas station owners to secure enough inventory ahead of the strike, an association official said earlier.
Continue reading...

The blame game over ICERD

Malaysia is one of two Muslim countries which refused to become a signatory to ICERD. When he said this, Utusan Malaysia picked up the thread of his remark and reported that ICERD would harm the special position of Malays and Islam. In 2019, Pakatan Harapan failed to ratify both ICERD and the Rome Statute. PKR president Anwar Ibrahim and DAP veteran Lim Kit Siang also accused Hadi of being disingenuous in downplaying foreign minister Saifuddin Abdullah’s role in not ratifying ICERD. Why blame Waytha Moorthy, a junior minister, and one who played a minor role in ICERD?

Biden to seek ‘red lines’ in talks with China’s Xi

US President Joe Biden said Sunday that the Democrats’ unexpected midterm election successes sent him into crunch talks with China’s Xi Jinping in a stronger position. — AFP picPHNOM PENH: US president Joe Biden said today he will seek to establish “red lines” in America’s fraught relations with Beijing when he holds high-stakes talks with Chinese counterpart Xi Jinping. Biden said he expected candid talks with Xi. “I know I’m coming in stronger,” he said of the midterms’ impact on his talks with Xi. Biden took a veiled swipe at Beijing in talks with leaders from the Association of South-east Asian Nations (Asean) regional bloc.

“It is hardly believable that the incident does not involve any assistance provided by people in Hong Kong,” Tong wrote on Facebook. Hong Kong Rugby Union’s preliminary investigation found that the correct anthem was given to the organisers by the team’s coach, the city government said. “Glory to Hong Kong” has a similarly rousing composition and was secretly recorded by an anonymous orchestra during the protests. However, its lyrics are about a very different struggle – freeing Hong Kong from Beijing’s control and bringing democracy to the city. Playing the song in Hong Kong is now all but illegal under the national security law.

South Korea has a long history of doing business with Saudi Arabia, going back to construction projects built decades ago. The latest deals come as the Saudi crown prince, who also serves as prime minister but is seen as Saudi Arabia’s de facto ruler, was scheduled to hold talks and lunch with South Korean president Yoon Suk-yeol in Seoul. The Crown Prince, widely known as MBS, and Yoon both attended the Group of 20 summit this week in Bali, Indonesia. South Korea will be represented by Prime Minister Han Duck-soo. The Crown Prince is well known for travelling with a large number of officials, is staying at the Lotte Hotel in central Seoul, where the Saudi delegation has reportedly booked some 400 rooms.

N. Korea’s over 10 fired missiles lands one close to South

SEOUL: A US B-1B long-range heavy bomber will participate in ongoing joint air drills with South Korea today, a defence ministry official in Seoul told AFP, ramping up a show of force after North Korea’s blitz of missile launches. The US and South Korea have warned that the launches could culminate in a nuclear test by North Korea, and extended their largest ever air force drills today in response. Pyongyang has ramped up missile launches in protest of the US-South Korea air drills. North Korea had called Vigilant Storm “an aggressive and provocative” drill, and said the US and South Korea would “pay the most horrible price in history” if it continued. She assailed China and Russia during the emergency session, accusing them of having “enabled” North Korea.

This is the theme tackled by 37-year-old Singaporean director He Shuming in his latest effort, “Ajoomma”, which means “auntie” in Korean. Auntie soon finds herself in South Korea, amidst enthusiastic camera-wielding tourists from China that make up her tour group. After failing to find the hotel her tour group is staying at, he invites her to spend the night at his home. She discovers that Jung-su lives alone with an adorable, old and sickly dog, whom he loves dearly. It is heartbreaking to see Jung-su part with a companion that has brought him much joy in his solitary life.

Waller added the markets were well ahead of themselves on just one inflation print, though he did concede the Fed could now start thinking about hiking at a slower pace. The news on Covid rules had stoked a short-covering bounce in the yuan last week, which added to broad pressure on the dollar as yields dived. The dollar regained a little ground early on Monday as its index added 0.4% to 106.870, but remained well short of last week’s 111.280 top. The euro eased to US$1.0324, after climbing 3.9% last week, while the dollar firmed to 139.27 yen following last week’s 5.4% drubbing. The dollar’s recent retreat provided a much-needed fillip to commodities, with gold holding at US$1,763 an ounce after jumping over US$100 last week.