U.S. Needs to Push Allies to Prepare for a Potential Conflict with China, Panel Says 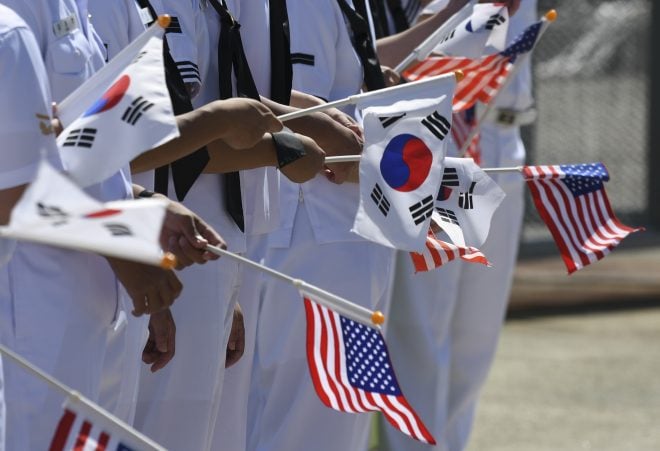 Needs to Push Allies to Prepare for a Potential Conflict with China, Panel SaysOver the next few years, the United States will likely press allies like South Korea harder to be ready for a conflict with China that may arise over Taiwan’s future, a leading scholar on global affairs at Johns Hopkins University said Tuesday. The United States will struggle to win a war with Beijing without support from allies, said Hal Brands, speaking at a Wilson Center event on China, the Republic of Korea and the United States. The United States probably does not have enough long-range, precision-strike munitions even for a short conflict. Allies might also hesitate in showing their support against China if Beijing invades Taiwan because China is the largest trading partner, Brands said. But Blanchette added, Xi “is not going to change his world view,” starting with insisting on domestic control and China as a global power.
Continue reading...

The defense chiefs also affirmed that the ROK-U.S. Alliance, along with the international community, will continue to take a strong stance against any further provocations by North Korea. Both Austin and Lee also discussed measures to strengthen regional security cooperation, including ROK-U.S.-Japan trilateral security cooperation, according to the statement, and committed to following up on developing specific courses of action to facilitate trilateral sharing of missile warning data. https://t.co/DZnQZLsJit — Jens Stoltenberg (@jensstoltenberg) January 31, 2023NATO and JapanIn Tokyo, Japan, on Tuesday, Japan Prime Minister Fumio Kishida and NATO Secretary General Jens Stoltenberg pledged to deepen ties between Japan and NATO. Both leaders also shared concerns with Russia’s growing military cooperation with China, including through joint operations and drills in the vicinity of Japan. Both leaders welcomed progress toward the new framework cooperation document between Japan and NATO, the Individually Tailored Partnership Programme (ITPP), in order to expand current Japan-NATO cooperation.

China Will Increase Pressure on Taiwan in Next Two Years Rather Than Invade, Says Pentagon Official

Chinese aircraft this spring released chaff and flares at an Australian maritime surveillance P-8, then cut across its flight path and stayed there for a time, he said. Those investments include undersea capabilities where the United States already has a technological advantage. There “has to be a daily effort to shape our adversary’s perception” of what the United States and its allies are capable of doing in a crisis. “The gap has closed,” but “no one should doubt the United States” retains the most capable military force. The “PRC [People’s Republic of China] challenge is more global” in the long-term than that posed by Russia, although both are nuclear powers, Kahl said.

Japan’s Prime Minister Fumio Kishida reiterated his country’s commitment to expanding Japan’s defense capabilities to deal with those who would jeopardize the peace and security of other countries, in a speech this week aboard destroyer helicopter carrier JS Izumo (DDH-183). Japan will formulate a new National Security Strategy and related documents, and will fundamentally reinforce Japan’s defense capabilities within the next five years and accelerate its realistic considerations of what is necessary to protect the Japanese public, without excluding any possibilities, the Japanese prime minister said. Kishida also said no time can be lost in enhancing Japan’s defense capabilities in maritime —adding new ships to its fleet, improving protections against missile attacks and raising the quality of life of Self-Defense Forces personnel. Japan’s Defense Ministry also wants two new Ballistic Missile Defence capable destroyers to replace the canceled Aegis Ashore installations, USNI News reported. He said the security environment was becoming more severe in the areas surrounding Japan, including the East China Sea and the South China Sea, although he omitted any mention of China in his speech.

New Pentagon National Defense Strategy Will be ‘Well Received’ by U.S. Shaping the international order in the future also means Beijing is investing heavily in overcoming the United States’ advantages in advanced technologies, Kari Bingen, director of the aerospace security project at CSIS, said. “They clearly want to have the technological advantage” that the United States has on the battlefield, she said. “You need to put some meat on the bones” in the National Defense Strategy through the Fiscal Year 2024 budget requests and beyond to answer that question, Bingen added. The EU is working with like-minded nations in the Indo-Pacific on building up domain awareness and with close allies like the United States on long-range strike and cyber.

Four Russian Tu-95MS bombers and two Chinese H-6 bombers conducted a joint patrol over the Sea of Japan Wednesday, prompting fighter scrambles by Korea and Japan in response. Around the same time, two Russian aircraft flew south before turning back and heading north. Japan Air Self-Defense Force (JASDF) fighter aircraft scrambled in response, according to a statement from the MoD. The JCS stated that Republic of Korea Air Force fighters scrambled in response, but the Russian and Chinese planes did not violate ROK airspace. Upon completion of the joint air patrol, the aircraft involved returned to their home bases.