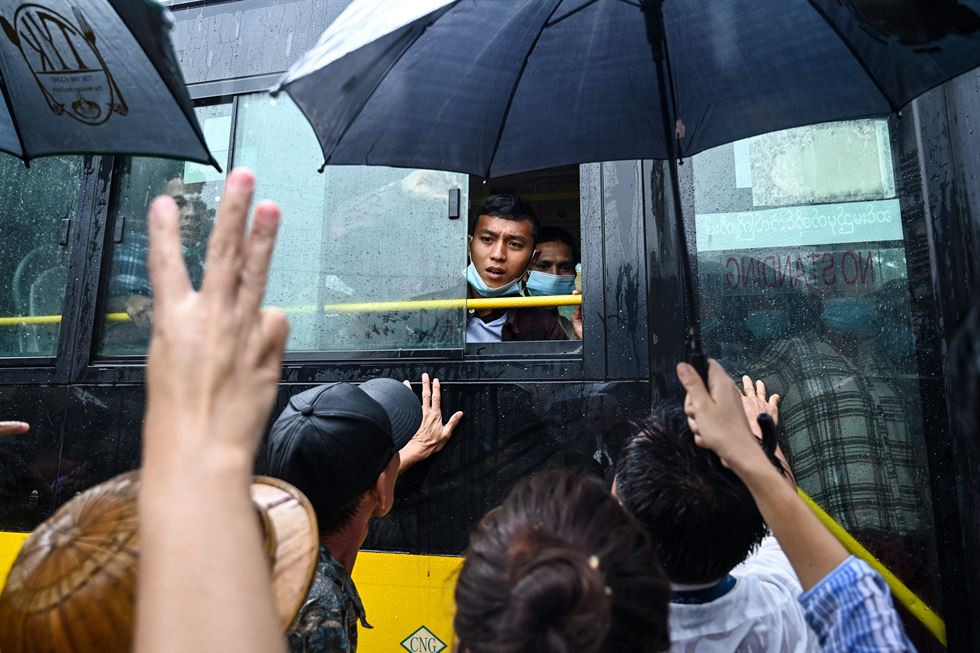 Relatives gather around a bus carrying prisoners being released outside the Insein prison in Yangon, Myanmar, Thursday. AFP-YonhapA former British envoy, an Australian economic adviser and a Japanese journalist left Myanmar Thursday as the junta released almost 6,000 prisoners, an AFP correspondent and diplomatic sources said. The Southeast Asian country has been in turmoil since the military's coup last year and a bloody crackdown on dissent during which thousands have been jailed. Australian economics adviser Sean Turnell and Japanese journalist Toru Kubota were on the same flight, diplomatic sources told AFP. Altogether, 5,774 prisoners will be released, "including some 600 women," the junta said in a statement.
Continue reading...

US and China cannot 'change each other', Beijing tells American envoy in first official meeting

Chinese foreign minister Wang Yi on Friday told Washington's top envoy to Beijing that China and U.S. would not be able to "change each other" and warned the U.S. not to attempt to contain the country's development. In his first official meeting with Ambassador Nicholas Burns, Wang relayed Chinese President Xi Jinping's call for both countries to uphold what he called the basic principles of "mutual respect, peaceful co-existence and win-win cooperation". "China-U.S. relations are at a critical juncture," Wang said, according to the Chinese government's readout of the meeting between the two diplomats. "As two major countries, China and the U.S. will not be able to change each other," he added. "The U.S. should not attempt to communicate with China from a position of strength or to attempt in suppressing and containing China's development.

Xi invokes Mao in visit to cradle of Communist revolution

AP-YonhapDressed in matching navy windbreakers and flanking President Xi Jinping, China's freshly appointed top leadership this week made their first group outing to the Communist Party's "holy land". Xi's choice to visit Yan'an ― a site inextricably linked with Communist China's founder Mao Zedong ― was an important, deliberate indication of the themes of his next five years at the helm, analysts said. Xi has centralized and personalized power more than any Chinese leader since Mao, culminating in his being anointed with a historic third term following last weekend's Communist Party (CCP) Congress. "The signal with the visit to Yan'an is one of celebrating a parallel (with Mao) and brooking no opposition," wrote Manoj Kewalramani from the Takshashila Institution in Bengaluru, India. Cradle of the revolutionYan'an is revered in Communist Party lore as the cradle of the movement.

US consumer inflation eased to 7.7% over past 12 months

Consumer inflation reached 7.7 percent in October from a year earlier and 0.4 percent from September, the government said Thursday. Stripping out volatile food and energy prices, ''core'' inflation rose 6.3 percent in the past 12 months and 0.3 percent from September. Even amid a tentative easing of inflation, the Federal Reserve is will likely continue raising interest rates to cool the economy and stem inflation. Federal Reserve Board Chairman Jerome Powell speaks during a news conference following a Federal Open Market Committee meeting, at the Federal Reserve Board Building in Washington, DC, on Nov. 2. The Federal Reserve delivered another steep interest rate increase on Wednesday, as expected, with its move to cool red-hot inflation.

AFP-YonhapUkraine's president said Friday that special military units have entered Kherson, a major regional capital that Russian forces had captured early in the war. Ukrainian intelligence urged Russian soldiers who might still be in the city to surrender in anticipation of Ukrainian forces arriving. It reported Russian shelling of villages and towns Ukrainian forces reclaimed in recent weeks during their counteroffensive in the Kherson region. The General Staff of Ukraine's army said the Russian forces left looted homes, damaged power lines and mined roads in their wake. Some quarters of the Ukrainian government barely disguised their glee at the pace of the Russian withdrawal.

Biden urges world to 'step up' climate fight at COP27

President Joe Biden speaks at the COP27 U.N. "The climate crisis is about human security, economic security, environmental security, national security and the very life of the planet," Biden said. "The United States has acted, everyone has to act. "Russia's war only enhances the urgency of the need to transition the world off its dependence on fossil fuels," Biden said. Abdel Fattah's family later announced that they had requested a presidential pardon for him following calls for his release from a raft of Western governments, including the United States.

What is Modern Korean Suicide?