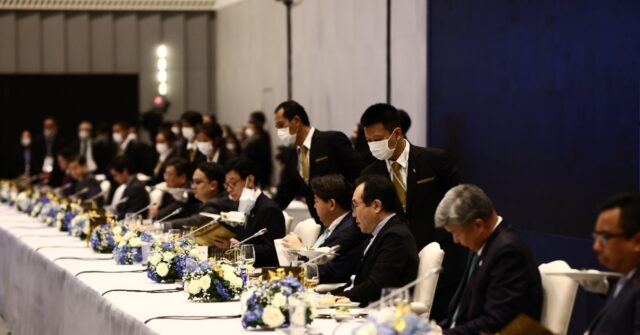 Chinese President Xi Jinping flew in to the talks in Bangkok from a G20 meeting in Bali where US President Joe Biden pressed him to use his influence to rein in Pyongyang’s activities. North Korea fired a short-range ballistic missile as Xi and Japanese Prime Minister Fumio Kishida prepared to meet, and warned Washington and its allies to expect a “fiercer” military response. Seoul and Washington have warned the North could be preparing to carry out a nuclear test, which would be its seventh. Xi last held face-to-face talks with a Japanese prime minister in December 2019, when he met Shinzo Abe in Beijing, though he has spoken to Kishida by phone. The G20 was upended by fears that a deadly missile strike on Poland signalled a dangerous escalation of Russia’s war in Ukraine.
Continue reading...

The South Korean Rugby Union on Monday apologized for playing the protest song “Glory to Hong Kong” instead of the Chinese Communist anthem at the men’s finals match in Incheon on Sunday. “Asia Rugby and Korea Rugby Union would like to sincerely apologize to the Hong Kong Rugby Union, the Government of Hong Kong Special Administrative Region and the Government of the People’s Republic of China for this incident,” the organizers said in their formal statement of apology. Protest Song Played for Hong Kong Rugby Team in South Korea https://t.co/a3iI5X5keY — Voice of America (@VOANews) November 14, 2022A source within the Korea Rugby Union told the South China Morning Post (SCMP) on Monday that a staffer “inadvertently” selected “Glory to Hong Kong” because they believed it was the correct national anthem. Those apologies were not enough to placate the Hong Kong government, which officially accepted the “human error” explanation but still demanded a “full and in-depth investigation” by the Hong Kong Rugby Union. “Glory to Hong Kong” was composed by an anonymous Hong Kong musician and embraced by the 2019 protest movement as its unofficial anthem.

North Korea Says It Will Become a 'More Serious Threat' to U.S.

The foreign minister of North Korea, Choe Son Hui, published an angry screed against America vowing Pyongyang would become a “more serious, realistic, and inevitable threat” to America so long as Washington pursued cooperation with South Korea and Japan. Experts within all three governments have been predicting an upcoming nuclear weapons test since at least May, though North Korea has yet to execute one. North Korea has conducted six nuclear weapons tests, the latest in 2017. The three held a joint press conference in Cambodia on Sunday prior to meeting behind closed doors, telling reporters that they would prioritize the threat North Korea poses to the region in their discussions. Yoon, speaking last, condemned Pyongyang’s “more hostile and aggressive provocations.”“Since I took office in May, North Korea has launched some 50 missiles to date,” he observed.

It could be seen as a possible attempt to help foster anti-Yoon sentiments in South Korea. Kim Yo Jong’s official title is a vice department director of the Central Committee of the North’s ruling Workers’ Party. But South Korea’s spy service believes she’s the North’s second-most powerful person after her brother and handles relations with South Korea and the United States. North Korea has been under 11 rounds of U.N. sanctions imposed over its nuclear and missile tests since 2006. North Korea has repeatedly said the U.N. sanctions are proof of U.S. hostility toward North Korea along with its regular military drills with South Korea.

North Korea fired one intercontinental ballistic missile and two short-range missiles Thursday, although the longer-range launch appeared to have failed, Seoul’s military said. “North Korea’s ICBM launch is presumed to have ended in failure,” the South Korean military said. Seoul’s military said earlier it had detected the launch of the long-range ballistic missile at around 7:40 am (2240 GMT) in the Sunan area of Pyongyang. The multiple missile launches come as Seoul and Washington are staging their largest-ever joint air drills, involving hundreds of warplanes from both sides. On October 4, North Korea fired a missile over Japan that also prompted evacuation warnings.

North Korea threatens to use nuke over S. Korea-US drills

China recently discarded most of its heavy-handed coronavirus safety protocols and resumed allowing its people to travel internationally. Chinese Foreign Ministry spokesman Wang Wenbin objected to Tedros’ remarks on Friday and insisted China has been acceptably transparent with its Chinese coronavirus data. “I have stated that for all countries, [Chinese coronavirus] response measures need to be science-based and proportionate without affecting normal travel and people-to-people exchange and cooperation. Over the past few days, authoritative medical experts from different countries have said that entry restrictions on travelers arriving from China are unnecessary,” Wang huffed. Wang also slammed South Korea for imposing restrictions on Chinese travelers.

Two American college students and 24 other foreigners were among the 153 confirmed deaths in a crowd surge at a Halloween festival in Seoul, South Korea on Saturday night. South Korean President Yoon Suk-yeol declared a national week of mourning on Sunday as Korean “K-pop” acts canceled concerts and promotional events. The Associated Press noted that Itaewon, located near the onetime headquarters of U.S. forces deployed to South Korea, is highly popular with both Korean young people and foreign visitors. Halloween is not a big holiday for children or trick-or-treaters in South Korea, but teens and twentysomethings have embraced it as an opportunity for costume parties. One theory circulating on South Korean social media holds that a celebrity visitor was incorrectly rumored to be visiting an Itaewon bar.